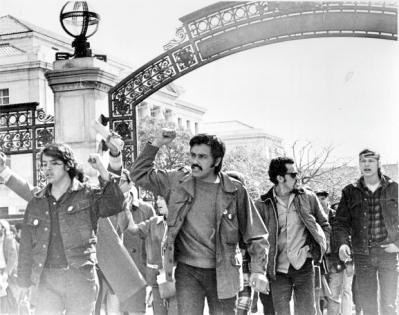 Established in 1969 in the midst of national and global decolonial uprisings, the Department emerged from student and community members’ demands for scholarly programs that focused on the understudied histories and situations of African Americans, Asian Americans, Chicanos, and Native Americans. Under the banner of the Third World Liberation Front (TWLF), activists at UC Berkeley initially proposed the creation of a Third World College similar to the one established a year before at San Francisco State University. After one of the longest and most violent student strikes in U.S. history, a compromise was reached that resulted in the creation of a Department of Ethnic Studies that housed four undergraduate programs: African American Studies, Asian American Studies, Chicano Studies, and Native American Studies.

Since the Department was founded, Ethnic Studies at UC Berkeley has consistently transformed, grown, and expanded with African American Studies becoming its own department, Asian American Studies becoming Asian American and Asian Diaspora Studies, Chicano Studies becoming Chicanx Latinx Studies, the formation of a Comparative Ethnic Studies area of focus, and the creation of a doctoral program (PhD). In 1997 the Ethnic Studies Library was established and in 1999, in response to drastic budget cuts and the loss of faculty members, students organized another series of rallies, sit-ins, and hunger strikes. This activism resulted in additional faculty positions, the creation of a Multicultural Community Center, and the establishment of the Center for Race and Gender.

Today, the Department of Ethnic Studies at UC Berkeley is internationally known as one of the most exciting and dynamic places to study race and indigeneity as well as their intersections with other accesses of power, such as gender, sexuality, class and citizenship status. Our faculty and former graduate students have produced some of the most seminal scholarship in the field of Ethnic Studies, and our alumni have gone onto notable professions, becoming doctors, teachers, scientists, lawyers, community organizers, artists, and elected officials.

*For a short documentary about our history, see On Strike: Ethnic Studies 1969-1999.